Megan in a Spot 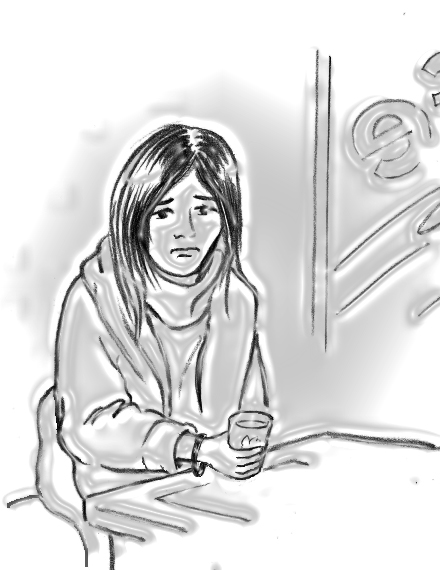 I usually sit in this corner of the cafe, I can see the Promenade, but people can’t see me so well. I feel safer here and it’s nice and quiet – not like back home.

I like the quiet, but sometimes I just think back to the times before we were married. He was sweet and kind to me then, we were happy.

After the Wedding though he changed, almost overnight. Wouldn’t let me go out on my own; didn’t want me to meet my friends. Even the family were ‘frozen out’. He made them unwelcome. There was a time, when I had that little job at the shop… If we were stocktaking, or if a delivery came in late and had to be unpacked I’d phone and tell him I’d be back a bit later. When I got home, there he was flinging the front door open before I could get my key in the lock. Following me in, bombarding me with questions before I’d even got my coat off. Why was I so late? Who else was there? On and on until I could hardly think straight. He made me feel as if I’d done something wrong, and after that he started checking my phone and my bag.

When I had my Christmas bonus, he said I could buy myself something with some of it. I was so pleased, and I found a pretty little red dress in the sales, it was very modest with long sleeves and a little Peter Pan collar. When I got home and showed him he almost exploded.

I couldn’t believe it, he was so angry and I just felt so guilty.

Then, the first time, when I complained and wanted to go round to my sister’s. When he hit me. I couldn’t go out then, not with a black eye – everyone would know. I was so ashamed, I’m sure it was my fault. He said it always was. He said I’d caused all the problems and it was up to him to put me straight. I was nearly going to argue, but I knew he would hit me again, so I kept quiet.

He comes with me to do the shopping and leaves me here with it, then he goes to the pub. I make my coffee last for an hour or so – my only hour of freedom, until he’s back to collect his possessions.

Sometimes I dream about running away, but I’ve got no money and where would I go? I’m sure it would just be something else I’d get wrong.

This entry was posted in Underground. Bookmark the permalink.

2 Responses to Megan in a Spot