Walking from my studio I’d seen this lad one rainy day, coming down the road from the school. He was drenched and miserable, his coat buttoned askew and his wellies all muddy. His mum had come to meet him so I felt I could ask her if she’d let him sit for me. I was very taken with the deep sadness in his young face. He wasn’t more than seven or so; how could such a young soul be in so much pain? His little face was a picture of misery and those dark eyes ready to overflow…
I wanted him to pose in the same clothes as when we first met. The clothes themselves seemed to express his mood as surely as his little face. The wet woollen helmet and the over- large scarf flung around his neck. The well worn winter coat, hastily done up and dragging off his shoulder gave him an air of careless indifference to his own comfort. His hands hung limply and rather helplessly by his side.
He really didn’t want to be here but his mum said he should. He doesn’t want to talk to me but I hope he will, though I can tell at the moment he can’t wait to be finished. I’m sure in his head, he’s already drifted off somewhere else; I wish I could imagine where in the lingering loneliness that hangs around him. His name is David… 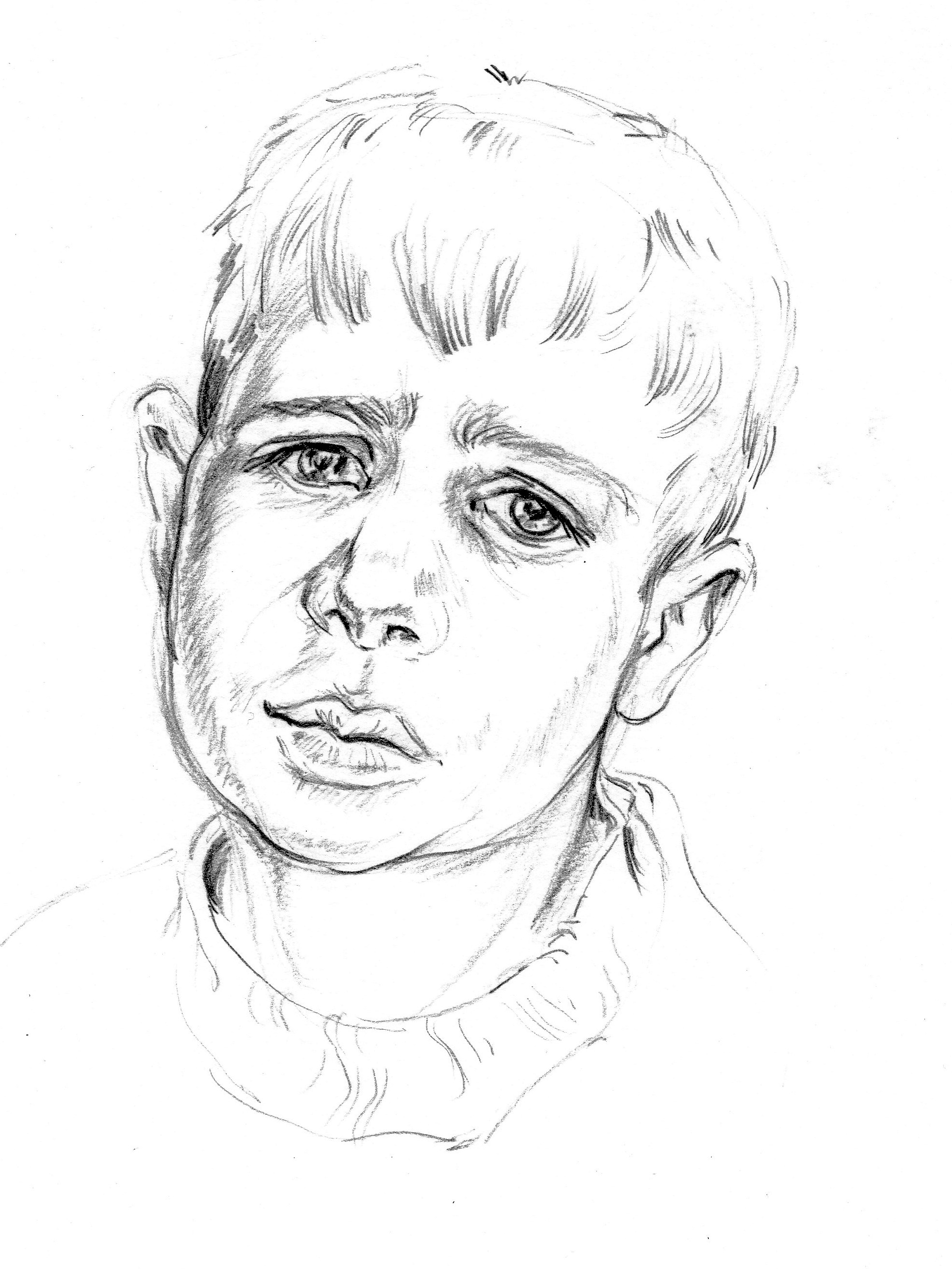 Not sure I like sitting here in front of this Artist Man. I feel a bit daft, I’d rather be outside than stuck in here. He says I don’t have to stay completely still all the time, but I ‘m rather worried. Mam said I should sit quietly and maybe he’d give me some sweets or some money, and anyway to stay out of her hair for a bit. Still don’t know why he wants me in my school coat and hat though; Mam wanted to dress me up in my best clothes but he said,
“No, the little boy in his wellies is what I want, like when I first saw you,” he smiled.
I wish he wouldn’t keep walking round and looking at me though, makes me feel funny. I’d rather be out by the harbour watching the boats and the fishermen. That’s my favourite place in the town. Don’t mind getting wet when I’m down by the shore. I’m gonna have a boat when I’m bigger – then I’ll sail off to exciting places; and I’ll be the Boss, I’ll be the Captain. Won’t have to take orders from anyone any more. They won’t be able to tell me off or send me away ever again. I’ll sail all round the world and be famous, that’ll show them. They’ll have to stop comparing me to my brother – he was always the favourite.
Then, when it all happened and everything went wrong, it’s like they thought it was my fault. Sometimes I think so too – why am I still here and he’s not? It’s not fair. Grandad says “Not to worry, ’cause life’s not fair – that’s just the way it is,” but it doesn’t really help, makes me cry sometimes. Grandma gives me a hug to make up for it but that didn’t help either though, when they sent me away .
I still just remember that awful day at school when I got sent to stand in the corridor ’cause I was arguing with Terry Brown. It was nearly break time and as the bell went, Mr. Mather, the headmaster came up to me and put his hand on my shoulder and told me to go with him. I was really shaking, after all I hadn’t done anything really bad but he took me to his office. Nobody has to go there unless they’re in serious trouble, everyone knows that.
He made me sit in one of those leather chairs which feel cold and shivery when you first sit down. It was so big my feet didn’t reach the floor so I felt even worse. Then the door opened and my Gran and Grandad were there. They looked very worried and Gran rushed up and hugged me. She started to cry and I didn’t know what was happening.
“I only had an argument with Terry Brown,” I stammered, “It wasn’t anything, really”
Grandad turned to Mr. Mather and said we should go now and they shook hands and took me home. It was pouring with rain then too. It always seems to rain when something bad happens.
When we got home the house was in darkness and mum and dad weren’t there; neither was my brother Phil, but his bike was lying on the path. It’s front wheel was all twisted and Gran pushed me indoors past it and shut the door quickly. I wanted to ask what was happening and where everyone else was – I knew something was wrong but Grandad just said I was going to stay with them for a while and I should pack my things now. They sent me to my room to get some clothes and things for school, it was very strange. Grandad came in while I was packing and sat me down on the bed. He looked really serious and then told me not to worry, but Phil was in hospital.
I stayed with Gran and Grandad for nearly two weeks; they never said anything about Phil until I heard Gran on the phone one wet Sunday afternoon. She said something like ” So you mean nothing else to be done?” then she sort of crumpled onto her knees and Grandad rushed over and hugged her.
” They said they should let nature take it’s course…” she muttered into his chest.
There’s big rainy shapes on the studio windows now and it feels like Phil’s just outside….

Originally inspired by ‘David ‘- A Charcoal drawing by John Bratby in the Jerwood  Collection.

This entry was posted in Flash Writes, Life's too Short. Bookmark the permalink.