As the train rattled on… 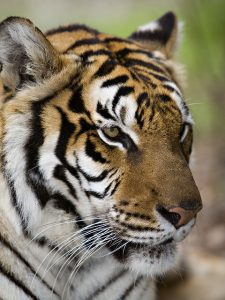 I fell to remembering when I left home to start my new job. I was nervous and excited at the same time as I approached on that first day. The huge flapping canvas reached high above me, the heavy fabric muting the daylight as it swayed in the breeze. The background hum and smell of diesel generators and a flurry of people shifting ropes and cables inflamed my senses as I hurried towards the large gleaming trailer to meet my new Boss.

Stepping up to knock on the door I was startled as it flew open and a burly suntanned man leapt out and greeted me with an iron handshake. Somehow I immediately felt at home – this job was to be the culmination of a boyhood dream, and this was real. We talked a while as we walked to the training area and as we drew closer I heard the low rumblings of the mighty cats. Their musky scent mingled with that of fresh sawdust which teased my nostrils and my skin prickled as I turned to see my future charges. Two graceful Tigers and a Lioness, and I was to train as an assistant Big Cat Tamer.

My biggest surprise came as I turned to meet my immediate Boss, all five lovely feet of feisty self assurance of her. I stood spellbound as ‘Tiger Lily’ the owner and star of the Big Top looked me over with her glittering eyes and finally pronounced me fit enough for a try out. Already totally smitten by her, I was now utterly thankful that I’d been accepted.

In the ensuing weeks and months, I learned a whole lot more about the cats and Lily. She was a tough, no nonsense teacher, and of course I was very keen and quick to learn. Over time both she and the cats came to trust and accept me. She taught me the ropes from the basics up, and after some considerable time I was allowed in the Ring with her. We had finally become a real team and she developed an act where she ‘saves’ me from a ‘wild beast’ seemingly by some kind of animal hypnosis. It was a huge success and for a while crowds came for miles to see us. It all seemed too good to be true – and of course, it was.
The Circus had lost a backer and was in financial trouble. That’s how, in desperation I decided to approach my father to finance us in return for shares in the business. I arranged to meet him the following week and surprisingly he showed interest, but with his business head he wanted to assess the idea at first hand. He set out what controls he would require over the operation, this brought anxiety and misgivings from Lily. On meeting, they’d taken an instant dislike to each other. All the chemistry was wrong and on taking him aside I realised he thought of her as low class, trailer trash. What he really wanted was for me to take over the family business – and was prepared to support the Circus for a year only if I agreed to return after that. Left with no other option, I felt I had to save Lily’s Circus, at least there would be a year to try and stabilise accounts.

I should have known better of course. His idea was to take control and run the Circus into the ground. Kill two birds with one stone, Lily into bankruptcy and me tied to his business under his terms. This was something I was determined to avoid at all costs. It’s just amazing luck that in the draft papers which were delivered to us to sign, it was clear the wording was ambiguous and more in his favour than ours. Lily challenged him in her inimitable feisty way and when the dust settled, the deal was off.

That was three years ago now and Lily and I had married, without his blessing of course. The Circus had stumbled along for a while on a shoestring but we’d finally joined up with Ed ‘s American Road-show. So that’s where I’m going with my Tiger Lily, after I’ve told the old devil exactly what I think of him…

This entry was posted in Flash Writes and tagged connections, Tigers, Trains. Bookmark the permalink.