Gerald was roused from his after dinner nap by a persistent knocking at his front door. Heaving himself up out of his chair, he lumbered to the hall and opened the door to a chirpy, blonde young woman wearing a purple tabard and a lip-sticked smile.

“Well!” he barked, still annoyed at being disturbed and scowling at her in the fading light. His irritation accentuated by his grouchy countenance as he stood planted squarely in the doorway.

Tanya, who’d arrived from Poland to look for work and improve her English had found this ‘opportunity’ on the notice board at the Job Centre. Enthused by this initial success she set off full of hope being a very optimistic and big-hearted girl. She loved people and animals and was thrilled to find these two things directly involved in the job. Although her command of English was pretty good, the intense feelings and prejudices regarding animals and pets in this country was not one she was familiar with. Her task now, however was to seek and sign up contributors to an animal charity, involving cold-calling  and the gathering of Direct Debit agreements from semi-reluctant householders. Though a little shaken by her first potential ‘customer’, she held her nerve, clutched her clipboard and ID badge a little tighter and crossing her fingers, began her rehearsed pitch.

“Good afternoon, I wonder you would mind if I ask a few questions on behalf this charity?”

Somewhat surprised, but softening a little to the pretty young woman, Gerald agreed to give her a few minutes of his precious ‘snoozing time.’ She smiled sweetly, glad to have made it past the first hurdle and fumbled in her bag for the leaflets.

“Firstly then I can ask you if you like animals?” she beamed brightly at him.

Gerald, who’d grown up with dogs and horses and really only liked shooting deer and pheasants, blustered awkwardly for moment, crossed his arms thoughtfully and announced;

“Yes, by golly, if they’re properly trained or if you can eat’ em of course. What!”

Tanya smiled nervously and ticked a box, eager to move on to the next question and introduce ‘ The Cat’s Shelter Charity,’ but was dumbfounded by Gerald’s next remark.

“I did eat a cat once in the War when we were stuck in a bunker with no supplies. Pretty darned horrid it was – skinny too. Ranks nick-named me ‘Pussy’ after that!”

He blushed at the memory, guffawed and preened his moustache proudly while Tanya began to wish she’d called next door instead but felt she should carry on anyway.

“You have animal of your own at the moment?” she chanced.

Catching her anxious tone, Gerald’s eyebrows shot up and his face reddened even more.

“Well,” he dithered, “I have, er had a Chimpanzee – until recently that is…”

Dropping her pen she gasped, wide-eyed in amazement, hoping desperately that he hadn’t eaten that too.

“Of course,” he huffed, “and she was a very special animal.”

“That a bit unusual no?” Tanya asked, “Especially for the, how shall I say, more old gentleman?”

“Er, she was actually my carer – supplied by the Research Institute up the road here. Can’t hardly manage without her.”

” A Chimpanzee carer! How she do this…?” exclaimed Tanya.

“Oh yes, she’d do everything around the house. For instance she’d swing from room to room collecting up the washing and do the laundry.”

” A monkey do the laundry?”

“Yes, yes. Of course I had to show her how the washing machine worked, but she soon picked that up. Rather enjoyed it I think, her favourite bit was the spin cycle. She used to wash everything she could find just so she could watch it and start spinning and dancing herself.”

“But she no longer here you say…you don’t have her anymore? What happen?”

“Well, since you ask, she ran away – to join a circus I think they said. Probably couldn’t stand my cigars… Drove me nuts sometimes though. We had to eat a lot of those too by the way – used to get stuck in me bridgework you see; and we always had to have her favourite dessert – Banana Splits on a Sunday…”

Gerald’s face fell and he began to look rather crestfallen. He took out a voluminous handkerchief and seemed to wipe away a tear or two.

“I so sorry,” said Tanya, now alarmed to see him so upset. “I did not know there’s still circus with animals in this country.”

“Oh no, well maybe not a circus, one of those theme park places I mean. You know ‘Safari Park’ or whatever. She was last seen at Chargwell Manor, not much chance of her coming back though. They think she’s got a boyfriend there – I ask you! How she knew where he was God knows. Some kind of sixth sense I suppose. Maybe she saw him in that programme on the box the other night. Another one of these damned wildlife things; I’d turn ’em on for her benefit you know. She must’ve got it in her head that’s where to go. Damned intelligent beast your Chimpanzee. Wouldn’t be surprised if she hadn’t booked herself a rail ticket too! Huh!”

“She travel on train – by herself?” gasped Tanya, her jaw dropping.

“No, no I’m just puzzling how she got all that way without being noticed. Well, not until the Ranger realised he had an extra visitor in the Primate house that is.”

Gerald scratched his head and looked visibly confused having forgotten what the conversation had started with and why it had got round to his errant Chimpanzee.

“Well what can I do for you young lady, did you say you’d come about the job?”

“The Carer’s job of course, that’s what we’re talking about isn’t it?” 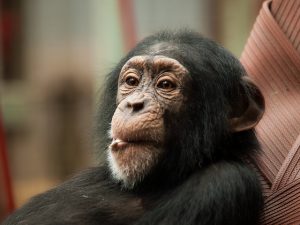 Photo with thanks to William Warby  ref.  https:// www.flickr.com

This entry was posted in Flash Writes, Underground. Bookmark the permalink.

One Response to Cross Purposes