The Artist and the Crow

I’ve been stuck here watching you fiddling about with your easel and inks for hours now. How much longer do expect me to wait? I’ve sat on that flimsy branch waving about in the breeze for ages and it’s really got on my nerves; and those darned church bells ringing every half hour are driving me nuts. I know I agreed to let you make a picture of me but that was hours ago. I didn’t expect to still be standing there as long as this, my toes have gone quite stiff. Why couldn’t you have just done a detailed sketch of me in pencil and filled in the background later with all that fiddly landscape stuff ?

Now my back aches and my feet have gone numb perched up there – there’s a chill wind sprung up and I’m sure more snow’s on the way too. Even my splendid tail’s drooped trying to hold that pose: And that’s not my best side either I hope you realise. Surely you could’ve done all those branches and buildings without me in it couldn’t you. If only you’d drawn me first then I could’ve got on with my own business; It’s not as if I’ve got all day to waste. I’ve missed lunch as well – I’m starving, Ravenous even. The Missus will be wondering where I am. I told her it was just for the morning and now it’s way past teatime. We were planning a raid on the tourists at the Cliff-top Cafe this afternoon but she’ll probably have to go on her own this time; Usually it’s much better if we’re ‘Mob-handed,’ at least we get a look-in before the pesky Seagulls.

Anyway from what I could see from up there, you’ve made everything look pretty gloomy and I’ve come out very threatening. I know we crows have a bad reputation as portents and omens of ill fortune, but that’s not true at all and wasn’t what I signed up for. OK we sometimes tend to lark about or play tricks and we do have a liking for collecting things, especially shiny objects like your watch I notice you’ve left on the side there. We are  actually just creative opportunists, nothing wrong with that. You could call us inspired entrepreneurs – with a dash of Magic of course. It’s just unfortunate that in those dreadful old stories and myths we’ve often been stereotyped as the bad guys; However, generally our real job is as messengers, and benevolent ones at that. We bring news of protection or ‘safe passage,’ certainly not omens of gloom and doom..

Did you know for instance, that Charles Dickens had even described the Crow as ‘that sedate and clerical bird’ in ‘The Mystery of Edwin Drood?’ Though he did mistakenly call it a Rook I admit, but at least he appreciated our sophistication and finer qualities. Who’s going to realise what a smart, intelligent bird I am if you show me looking so very sinister? – I really think you could’ve made me look a bit more appealing, it’s not doing my public image any good is it? Do you know that I can count and use tools… initially only stones and twigs it’s true, but I’m considering learning a bit of IT, then I can access Wikipedia to update our entry myself…

What do you mean, ‘It’ll look better when you’ve put the colour on ?’… And, NO I can’t come back for another sitting … 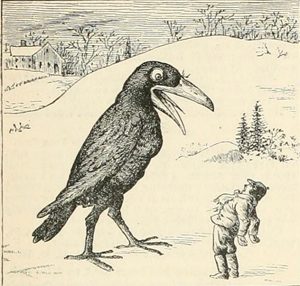 This entry was posted in Flash Writes and tagged Crows, quirky, whimsey. Bookmark the permalink.