In a quiet little suburban quarter of a big seaside town a very surprising thing once happened. Something which grew out of small events and amazed the local inhabitants by it’s remarkable effect. Friends and families alike would always remark on it when they met in the street.

The central shopping area with it’s useful array of facilities, a tiny little supermarket, a bank, an independent grocer and fruiterer, a butcher, a baker (but no candlestick maker yet,) a pub, an ‘Offie’, a chippie and a couple of takeaways served the locals very well. Always buzzing and busy, the shops thrived. Not to mention the little cafes and Deli which were always well attended; It was in these hubs of temporary rest and relaxation that the phenomenon began to be noticed a few years back.

The summers brought outside seating to these establishments, with chairs, cushions and awnings against the sun or less cheery weather. Happy customers would settle down for a chat with a flat white or a Latte and an almond croissant, and shoot the breeze. It was then that another regular visitor would appear. He’d never buy a drink or a cake, but was just content to take a seat alongside the other customers and listen in to the gossip, only occasionally checking the tables for any uneaten edibles. His presence was often remarked upon but seldom objected to and he was missed if he didn’t appear for a day or so. Someone would pipe up with “No, he’s fine, I saw him waiting to go into the butcher’s only yesterday,” or “He was in our road the other day, sitting on the wall and project managing the building work.” Someone else might add “Well I was a bit worried ’cause he was just standing in the middle of our road and the traffic rushes through there. I did at least persuade him to get onto the pavement in the end though.”

It seems the whole of the local populace had taken a shine to this quirky old feller who now appeared regularly in unexpected places all round the district. His affable nature and gregarious personality made him welcome wherever he went and everyone kept half an eye out for his safety. His name was Wilf and he was a splendidly fluffy ginger Persian cat. He somehow managed to establish an ‘Open Door Policy’ yet to be bettered, even by the Salvation Army, with only one proviso, the doors in question seemed to be all those in his neighbourhood. 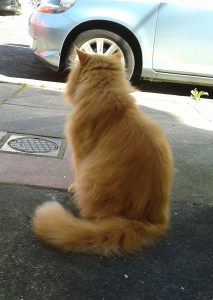 As one who enjoyed company and his ‘creature comforts’ Wilf was able to access a multitude of friendly households and any available sofas or comfy chairs they had to offer. This sometimes caused a little anxiety at his own home, but usually sightings were reported and all was well. His wanderings had now become an established habit and as his fame was spreading people had begun taking selfies with him. This, together with concern about not knowing where he was, a Facebook page * was set up to post pictures and keep track of the wayward Wilf. So popular was this that ‘Wilf’ merchandise was produced and sold in aid of Wilf’s favourite charity ‘Lost Cats Brighton’ which, with his growing fame and popularity achieved remarkable results.
Firstly in the form of Wilf Badges and latterly to cards, mugs, ‘T’ shirts, soft toys, many of these items will be available at a Christmas Open House in Brighton this year.               ( * see  www.facebook.com/fivewayswilf ) 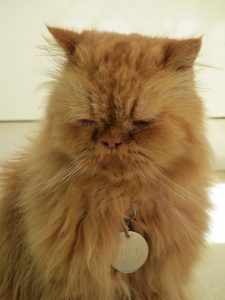 This splendid character brought together countless members of the local community in ways that usually take years to do. Sadly Wilf, an elderly gent became ill this year and has now departed to the great cushion in the sky, but his name lives on in the local annals and he is remembered not only with fond smiles by all who knew him, but has been honoured in a very particular local manner…

‘FIVEWAYS WILF’ is on the bus ! 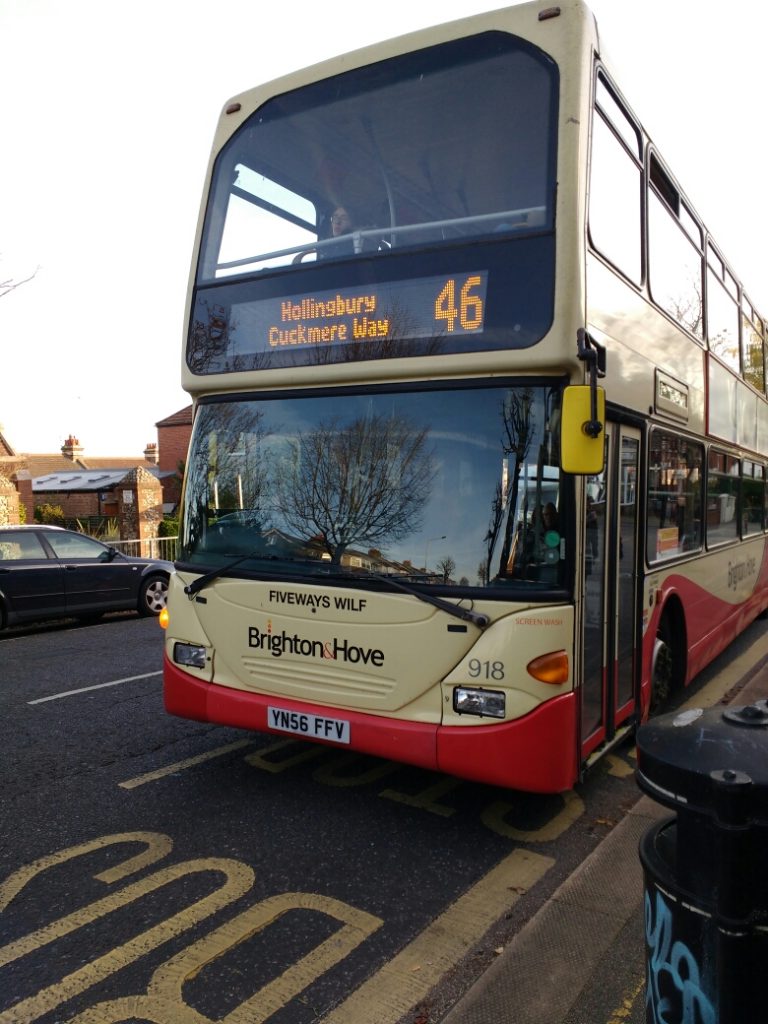 In fond memory to a great local celebrity with sympathy and respect to his nearest and dearest.

One Response to Local Celebrity