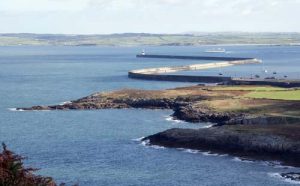 Late train and rain and
cows on the line detain us.
The ferry’s missed and so we sit
waiting for the replacement bus.
Forget the estimated times of leaving
just doubts about our tickets and seating.
Now needs changes to our destination
so we board the bus outside the station.
On the motorway heading into town,
our replacement bus has broken down.

Disbelief’s left in the shade

and frantic hasty phone calls made

for another bus, to rescue us.

with exhausted senses of survival.

Later at the dock we soon define
our ‘would be’ ferry making up good time.
Though anxious leaden seas which heave
and grey skies scowl down as we leave.
The engines throb and speed a-crossing,
thankfully calm, no waves and tossing.
Not heading for the place that’s usual
but the port that’s much more helpful.
Light to moderate is what we’ll be today,
or so the tannoy then would say.