The mirror showed, in starkest terms, a sagging jaw-line and a furrowed field of wrinkles which stretched (or folded) across the entire landscape of her face and neck.

“Oh, shut up, there must be a mistake. I dance and sing. I jog and swim and dig the garden, culture, art and music things; but you’re right, I sometimes feel I am invisible. In the street some folk would just walk through me – step aside, or get mowed down is how I feel out in the town. I just thought it’s ‘young- people-with-no-manners’ again…”

“… Now there’s a refrain from an ‘Oldie Talking’ if ever I heard one !”

“Well, dammit, I refuse to be an ‘Oldie’ as you so inelegantly put it. I shall rebel against it before it’s too late. ‘Look out World – here I come!’ I am, if nothing else, an inventive and creative beast. If, as you say this is old-age on my doorstep, I shall make sure she goes down fighting!”

So saying, she headed for her wardrobe and flung open the doors. Some tired geriatric moths staggered out as she grabbed a handful of beige Crimplene dresses and flung them on the floor. There followed a procession of pastel ‘cardies’, pleated skirts and flesh coloured tights. Soon the bedroom floor was a battlefield of obsolete and moribund attire.

After dumping several over-stuffed bags of the despised clothes in a Charity shop, she headed for Primark with a renewed determination of purpose. She’d never been there before and was initially stunned by the enormity of it all. What seemed like acres and acres of clothing lined the walls and endless racks and piles of colour met her astonished gaze. Taking a few deep breaths she regained her composure and soon became acclimatised to this ‘alien’ environment. The feverish buzz of her fellow shoppers infected her brain and she set to work filling a large basket.
Now unfazed by the vibrant colours and multitude of designs available, it was poetry in motion;

T-shirts, blouses and cut-off trousies
Skirts and dresses and things for one’s tresses
Coats and jackets and things in packets
that looked like tights but sparkled in the lights
Luckily they came in many sizes
sometimes they fitted, which added surprises.
So three hours later, and still not tired
a whole seasons outfits she’d now acquired
As she paid her money and left the store
catching sight of the shop next door,
her stubbornness completely undiluted
accessories next and then she’s suited.
Hats and scarves and such they sold
none of which you could call ‘old’
Wacky colours, styles and shapes
and arty things in silks and crepes.
They even had a make-up counter
with many things that did astound her
Another hour here of mega-spending
She needed a cab as gravity’s pending.
Home at last with a pile of goodies,
including some red and purple ‘hoodies’
Now at the Hairdresser’s she’d once read
a magazine article that stuck in her head
Make-over’s was what it was all about
and now’s the time to try it out.
Was it clothes, then hair and make-up ?
I think I need a tonsorial shake up –
Her stylist had a free appointment
So straight to town she smartly went
She chose a shade of bright magenta
to emphasise her new persona
It looked amazing they all said
like a vibrant pompom on her head
While she was at it, got her nails done
and the tanning suite to get the ‘sun’

“What a day, I feel outrageous
all this excitement is quite contagious
What’s needed is a cup of tea…
no, wait this is the brand new me !
Once that would’ve been just been fine,
but I think I’ll have a glass of wine –
a toast to celebrate my splendid spree ”
… to ‘Carrying on rebelliously’ 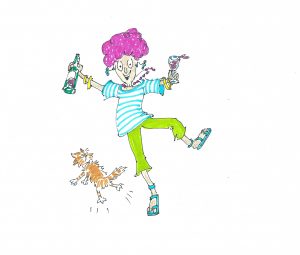 This entry was posted in Life's too Short and tagged Let's face it, Oldies, rebelling. Bookmark the permalink.